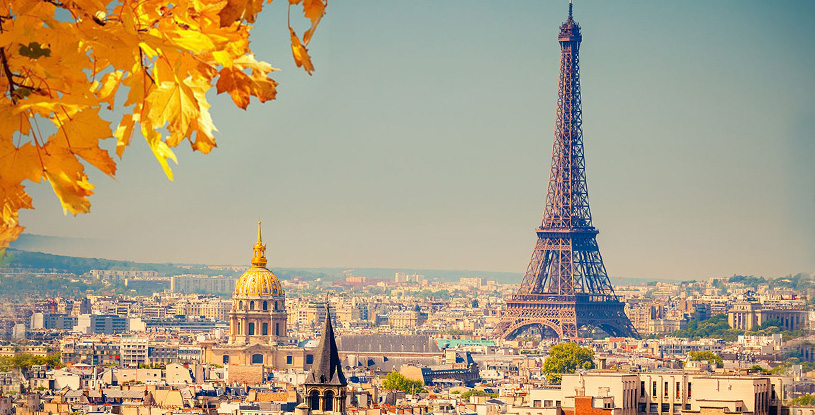 ITIENARY: Day 1:Arrive Paris
representative greets you at the 'meeting point' at the exit after immigration and customs and transfers you comfortably to your hotel (check in after 1600 hrs). takes care to start your sightseeing only the next day so that you can relax after your long flight and get over your jetlag.
Overnight in Paris.
Dinner at an Indian restaurant.

Day 2:In Paris.
Today its Euro Disney! Unleash the child in you for a fun filled excursion! Thrilling rides, favorite Disney characters and incredible shows make it a complete family attraction.
Note: Your park ticket gives you the option of entering either Euro Disney Park or Walt Disney Studios.
The Euro Disney Park is divided into Frontier land, Adventure land, Fantasyland, Discovery land which are the four magical themed lands and the ever famous Main Street USA.
Thrilling rides, incredible shows, parades, fantasy and excitement guarantees non-stop fun and action.
Fairytales come to life. Thrills in all sizes and shapes. Big thrills such as Space Mountain Mission 2, Indiana Jones, Big Thunder Mountain, takes you to the edge of the universe and little ones, where you can sail around the world with "It's a small small world".
Family fun is around every corner, from Pirates of the Caribbean to the Mad Hatter's Tea Cups.
Favourite Disney Characters are waiting to meet you. You can 'Hello' Pooh, 'Howdy' Goofy and meet Mickey and Minnie. Do not forget to take a snapshot with one of your favourite Disney characters! Say "Cheese" and get a photograph accompanied by a hug and an autograph.

Discover the magical world of cinema and television at Walt Disney Studios where a behind the scenes destination sensation awaits you. Experience movie magic and cinema sets coming to life through cinemagical 'lots', featuring thrilling attractions and spectacular shows with your dreams centre-stage allowing your "screendreams" to come true! Make your big screen debut at Toon Studio or Production Courtyard.
Enjoy a guided panoramic highlight city tour of famous monuments like the Pyramid of the Louvre, Garnier's Opera, the largest opera theatre in the world, the River Seine, the Place de la Concorde - the site of the infamous guillotine, the Champs Elysees - one of the most fashionable streets in the world, the Napoleanic Arc de Triomphe and the Hotel des Invalides.
End the day taking in the dazzling overview of the glittering city as you ascend by an elevator to the 2nd level of the Eiffel Tower! After dinner, return to your hotel.
Overnight in Paris.
Breakfast at the hotel and Dinner at an Indian restaurant.

Day 3:Onto Switzerland.
Today sit back, relax and enjoy a spectacular scenic drive of approximately seven hours to Switzerland. Drive past beautiful views of the Alps with glimpses of Italian countryside and its medieval towns.
Perhaps even more amazing than the Swiss cities themselves is the countryside. Unlike its modern and rather populated cities, its countryside is formed by patches of small villages, often consisting of ancient historical houses and picturesque chalets, separated from each other by beautiful landscapes, a unique composition of mountains, farms, medieval castles and the famous Swiss cows browsing the evergreen meadows.
After dinner, check into your hotel.
Overnight in Central Switzerland.
Breakfast at the hotel, Packed lunch from an Indian restaurant and Dinner at an Indian restaurant.

Day 4:In Switzerland.
See the thundering Rhinefalls at Schaffhausen. Take a boat to the foot of the falls.
Then a scenic drive to the city of Zurich, where on arrival you will proceed on an orientation tour strolling down Bahnhofstrasse - the city's fanciest shopping street, past famous sights like Peterskirche (St. Peter's Church) situated in a medieval square, famous for its 16th Century clock, the largest clock face in Europe. The elegant copper spire of the Fraumunster found in the 9th Century with impressive stained glass windows. Across the Limmat River, you will get a view of the beautiful Romanesque and Gothic Cathedral dedicated to Zurich's patron saints.
On to Lucerne with its picturesque mountains, lakes, cowbells, alpine villages and meadows, the poignant Lion Monument, the covered, wooden Kapellbrucke (chapel bridge), and the ornate Jesuit Church.
You will have another encounter with the marvels of Swiss shopping.
Later after dinner, drive back to your hotel.
Overnight in Central Switzerland.
Breakfast at the hotel, Lunch and Dinner at an Indian restaurant

Day 5:In Switzerland.
Today you will drive to Interlaken where you have a free day or you have the option to enjoy "Visit to Jungfrau with Indian Lunch and Interlaken City Tour". Note: Guests not availing the optional tour to Jungfrau will get a packed dinner.
Overnight in Central Switzerland.
Breakfast at the hotel and Dinner at an Indian restaurant.

Day 6:Onto Innsbruck.
Next your drive today takes you to the Principality of Liechtenstein and a stop at Vaduz - the capital, famous for postage stamps. Later onto Austria. En route halt at the internationally renowned Swarovski Crystal Worlds in Wattens, and prepare to be dazzled at the 'Chambers of Wonder'! In a wondrous blue hall dominated by a Unicum- a wall of crystal, you see the world's biggest crystal and it's smallest! Over 7 million people from all corners of the globe, have already been thrilled by the Swarovski experience - now you are one of them!
Continue a scenic drive to Innsbruck. Located on the Inn River, Innsbruck is one of Europe's most beautiful and lively cities. An international centre for winter sports, it has hosted the Winter Olympics twice!
Our Orientation tour introduces you to its world famous sights. View the Golden Roof or 'Goldenes Dachl', an ornate Gothic balcony erected by the Emperor Maximilian I in the 15th century, decorated with gold painted copper shingles. Next walk to the Imperial Church followed by the 'Hofburg' or Imperial Palace. This Capital of the Alps, has a history of 800 years!
Later check into the hotel.
Overnight in Innsbruck area.
Breakfast at the hotel, Lunch at an Indian restaurant and Dinner at the hotel.

Day 7:Onto Padova.
Today your journey takes you on a drive past quaint villages, medieval castles and fruit orchards and cutting across the fertile Adriatic Plains, to the magical lagoon city of Venice.
Nothing prepares you for the captivating city of canals and palaces - Venice is simply unique! Built on 117 small islands, it is a pedestrian's city, so get set for a walking tour.
Cruise from Tronchetto Pier and glide romantically past fairytale palaces, through incredible miniature canals to the Piazza San Marco (St. Marks Square), where you disembark. Napoleon dubbed the Square the 'finest drawing room in Europe' for its constant carnival atmosphere! Witness the bronze Moors striking the hour, as they have been doing for the past 500 years!
From there to the Doge's Palace, connected by the 'Bridge of Sighs' to its prisons. It was from here that the legendary lover Casanova made his famous escape!
End this exciting tour with a brief visit to a Murano Glass Showroom (when open for visitors) for a demonstration in glass blowing. It was on the island of Murano, that glass was first made in Europe and hand blown Venetian glass is world famous.
After you take your return cruise to Tronchetto Pier, drive to dinner and then check into your hotel.
Overnight in Padova.
Breakfast at the hotel, Lunch and Dinner at an Indian restaurant.

Day 8:Onto Tuscany.
Drive across the Apennine Mountains, along the Brenta River past Bologna, to Pisa, the hometown of Galileo and a city, which makes the most of its claim to fame - its Leaning Tower! It has leaned almost since construction first started, due to the swampy soil beneath it. At a photo stop here, note its striking beauty along with its characteristic tilt. It is the Duomo's (Cathedral) Bell Tower. Together with the Baptistery, these are all a part of the Field of Miracles.
Continue to Florence, a shrine to the wonders of the Renaissance, with more artistic treasures per square meter than any other city in the world!
Included in your walking tour of Florence is a visit to the remarkable Duomo (when open for visitors), which is the fourth largest cathedral in the world. It dominates the city's skyline and still defines its scale - no building in town is taller! Besides it is the 'Gate to Paradise' - the heavenly gilded bronze doors of the Baptistery, originally a pagan temple and the open-air gallery in Signoria Square.
Walk on the famous Ponte Vecchio, the oldest surviving bridge in the city.
After an exciting tour, drive to the region of Tuscany, where on arrival you will be checked into your hotel.
Overnight in Arezzo.
Breakfast at the hotel, Lunch at an Indian restaurant and Indian dinner at the hotel.

Day 9:Onto Rome.
'Rome was not built in a day'- the truth of this oft quoted adage hits you with full force, as we pack in all the 'must see' agenda into our guided panoramic highlight city tour ! According to legend, Rome was founded by Romulus and Remus in 753 BC.
Start your introduction to Rome with a journey to The Vatican the smallest nation in the world! It boasts a priceless art collection and is probably per square foot the richest country in the world! The most famous square of The Vatican is St. Peter's Square with St. Peter's Basilica, one of the largest churches in the world. Gaze in awe at Michelangelo's Pieta.
Continue your tour driving past the triumphal Arch of Constantine, one of the most important commemorative monuments of antiquity and then drive through Piazza Venezia, where the grandiose monument to the reunification of Italy is often referred to as the Marble wedding cake! Pass the Circus Maximus - the Hippodrome - known for its ancient chariot races, which was reconstructed by Hollywood for the well known movie 'Ben Hur'!
Pay tribute to the brave Gladiators of Rome. At this amphitheatre, the notorious and gory gladiatorial games were held, where they fought one another and wild animals while the crowd roared!
Pass the ruins of the Roman Forum and end the tour at the famous Trevi Fountain.
Legend has it, that if you make a wish and toss a coin over your left shoulder into the fountain, you are sure to return to Rome! After an exciting tour relax and enjoy your return drive to the hotel.
Note: Due to Rome city regulations, certain roads may be off limits for long distance coaches. This may result in the Rome sightseeing being done partly by foot / public transport. Overnight in Rome.
Breakfast at the hotel, Lunch and Dinner at an Indian restaurant.

Day 10:Homeward Bound.
Good times need never end! As you get ready for the airport and your flight back home